The history of the tablets translated in the following pages is strange and beyond the belief of modern scientists. Their antiquity is stupendous, dating back some 36,000 years B.C. The writer is Thoth, an Atlantean Priest-King, who founded a colony in ancient Egypt after the sinking of the mother country.

He was the builder of the Great Pyramid of Giza, erroneously attributed to Cheops. In it he incorporated his knowledge of the ancient wisdom and also securely secreted records and instruments of ancient Atlantis. For some 16,000 years, he ruled the ancient race of Egypt, from approximately 52,000 B.C. to 36,000 B.C. At that time, the ancient barbarous race among which he and his followers had settled had been raised to a high degree of civilization.

Thoth was an immortal, that is, he had conquered death, passing only when he willed and even then not through death. His vast wisdom made him ruler over the various Atlantean colonies, including the ones in South and Central America.

When the time came for him to leave Egypt, he erected the Great Pyramid over the entrance to the Great Halls of Amenti, placed in it his records, and appointed guards for his secrets from among the highest of his people. In later times, the descendants of these guards became the pyramid priests, by which Thoth was deified as the God of Wisdom, The Recorder, by those in the age of darkness which followed his passing. In legend, the Halls of Amenti became the underworld, the Halls of the gods, where the soul passed after death for judgment.

During later ages, the ego of Thoth passed into the bodies of men in the manner described in the tablets. As such, he incarnated three times, in his last being known as Hermes, the thrice-born. In this incarnation, he left the writings known to modern occultists as the Emerald Tablets, a later and far lesser exposition of the ancient mysteries.

List ye, O Man, to the deep hidden wisdom,
lost to the world since the time of the Dwellers,
lost and forgotten by men of this age. 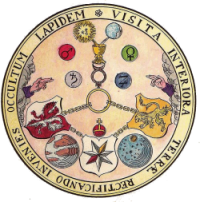 Know ye this Earth is but a portal,
guarded by powers unknown to man.
Yet, the Dark Lords hide the entrance
that leads to the Heaven-born land.
Know ye, the way to the sphere of Arulu
is guarded by barriers opened only to Light-born man.

Upon Earth, I am the holder of the keys
to the gates of the Sacred Land.
Command I, by the powers beyond me,
to leave the keys to the world of man.

Before I depart, I give ye the Secrets of how
ye may rise from the bondage of darkness,
cast off the fetters of flesh that have bound ye,
rise from the darkness into the Light.

Know ye, the soul must be cleansed of its darkness,
ere ye may enter the portals of Light.
Thus, I established among ye the Mysteries
so that the Secrets may always be found.

List ye now to the unveiling of Mystery.
List to the symbols of Mystery I give.
Make of it a religion for only thus will its essence remain.

Regions there are two between
this life and the Great One,
traveled by the Souls
who depart from this Earth;
Duat, the home of the powers of illusion;
Sekhet Hetspet, the House of the Gods.
Osiris, the symbol of the guard of the portal,
who turns back the souls of unworthy men.

Beyond lies the sphere of the heaven-born powers,
Arulu, the land where the Great Ones have passed.
There, when my work among men has been finished,
will I join the Great Ones of my Ancient home.

Seven are the mansions of the house of the Mighty;
Three guards the portal of each house from the darkness;
Fifteen the ways that lead to Duat.
Twelve are the houses of the Lords of Illusion,
facing four ways, each of them different.

Forty and Two are the great powers,
judging the Dead who seek for the portal.
Four are the Sons of Horus,
Two are the Guards of East and West of Isis,
the mother who pleads for her children, Queen of the Moon,
reflecting the Sun.

Ba is the Essence, living forever.
Ka is the Shadow that man knows as life.
Ba cometh not until Ka is incarnate.
These are mysteries to preserve through the ages.

Keys are they of life and of Death.
Hear ye now the mystery of mysteries:
learn of the circle beginningless and endless,
the form of He who is One and in all.
Listen and hear it, go forth and apply it,
thus will ye travel the way that I go.

Mystery in Mystery,
yet clear to the Light-born,
the Secret of all I now will reveal.
I will declare a secret to the initiated,
but let the door be wholly shut against the profane.

Three is the mystery, come from the great one.
Hear, and Light on thee will dawn.

In the primeval, dwell three unities.
Other than these, none can exist.
These are the equilibrium, source of creation:
one God, one Truth, one point of freedom.

Three come forth from the three of the balance:
all life, all good, all power.

Three are the qualities of God in his Light-home:
Infinite power, Infinite Wisdom, Infinite Love.

Three are the powers given to the Masters:
To transmute evil, assist good, use discrimination.

Three are the things inevitable for God to perform:
Manifest power, wisdom and love.

Three are the powers creating all things:
Divine Love possessed of perfect knowledge,
Divine Wisdom knowing all possible means,
Divine Power possessed by the joint will of
Divine Love and Wisdom.

Three are the circles (states) of existence:
The circle of Light where dwells nothing but God,
and only God can traverse it;
the circle of Chaos where all things
by nature arise from death;
the Circle of awareness where
all things spring from life.

All things animate are of three states of existence:
chaos or death, liberty in humanity and felicity of Heaven.

Three necessities control all things:
beginning in the Great Deep, the circle of chaos, plenitude in Heaven.

Three are the paths of the Soul:
Man, Liberty, Light.

Hear ye now of he who is liberated,
freed from the bondage of life into Light.
Knowing the source of all worlds shall be open.
Aye, even the Gates of Arulu shall not be barred.
Yet heed, O man, who would’st enter heaven.
If ye be not worthy,
better it be to fall into the fire.
Know ye the celestials pass through the pure flame.
At every revolution of the heavens,
they bathe in the fountains of Light.

List ye, O man, to this mystery:
Long in the past before ye were man-born,
I dwelled in Ancient Atlantis.
There in the Temple,
I drank of the Wisdom,
poured as a fountain of Light
from the Dweller.

Give the key to ascend to the
Presence of Light in the Great world.
Stood I before the Holy One
enthroned in the Flower of Fire.
Veiled was he by the lightnings of darkness,
else my Soul by the Glory have been shattered.

Forth from the feet of his Throne like the diamond,
rolled forth four rivers of flame from his footstool,
rolled through the channels of clouds to the Man-world.
Filled was the hall with Spirits of Heaven.
Wonder of wonders was the Starry palace.

Above the sky, like a rainbow of Fire and Sunlight,
were Formed the Spirits.
Sang they the glories of the Holy One.
Then from the midst of the Fire came a voice:
Behold the Glory of the first Cause.
I beheld that Light, high above all darkness,
reflected in my own being.
I attained, as it were, to the God of all Gods,
the Spirit-Sun, the Sovereign of the Sun spheres.

There is One, Even the First,
who hath no beginning,
who hath no end;
who hath made all things,
who govern all,
who is good,
who is just,
who illumines,
who sustains.

Then from the throne, there poured a great radiance,
surrounding and lifting my soul by its power.
Swiftly I moved through the spaces of Heaven,
shown was I the mystery of mysteries,
shown the Secret heart of the cosmos.

Carried was I to the land of Arulu,
stood before the Lords in their Houses.

Opened they the Doorway so I might
glimpse the primeval chaos.
Shuddered my soul to the vision of horror,
shrank back my soul from the ocean of darkness.
Then saw I the need for the barriers,
saw the need for the Lords of Arulu..

Only they with their Infinite balance could
stand in the way of the inpouring chaos.
Only they could guard God’s creation.

Then did I pass ëround the circle of eight.
Saw all the souls who had conquered the darkness.
Saw the splendor of Light where they dwelled.

Longed I to take my place in their circle,
but longed I also for the way I had chosen,
when I stood in the Halls of Amenti
and made my choice to the work I would do.

Passed I from the Halls of Arulu
down to the earth space where my body lay.
Arose I from the earth where I rested.
Stood I before the Dweller.

Gave my pledge to renounce my Great
right until my work on Earth was completed,
until the Age of darkness be past.

List ye, O man, to the words I shall give ye.
In them shall ye find the Essence of Life.
Before I return to the Halls of Amenti,
taught shall ye be the Secrets of Secrets,
how ye, too, may arise to the Light.

Preserve them and guard them,
hide them in symbols,
so the profane will laugh and renounce.
In every land, form ye the mysteries.
Make the way hard for the seeker to tread.

Thus will the weak and the wavering be rejected.
Thus will the secrets be hidden and guarded,
held till the time when the wheel shall be turned.

Through the dark ages, waiting and watching,
my Spirit shall remain in the deep hidden land.
When one has passed all the trials of the outer,
summon ye me by the Key that ye hold.

Then will I, the Initiator, answer,
come from the Halls of the Gods in Amenti.
Then will I receive the initiate, give him the words of power.

Hark ye, remember, these words of warning:
bring not to me one lacking in wisdom,
impure in heart or weak in his purpose.
Else I will withdraw from ye your power
to summon me from the place of my sleeping.

Hark ye, remember, these words of warning:
bring not to me one lacking in wisdom,
impure in heart or weak in his purpose.
Else I will withdraw from ye your power to
summon me from the place of my sleeping.

Now go ye forth and summon thy brothers
so that I may impart the wisdom to light thy
path when my presence is gone.
Come to the chamber beneath my temple.
Eat not food until three days are past.

There will I give thee the essence of wisdom
so that with power ye may shine amongst men.
There will I give unto thee the secrets so that
ye, to, may rise to the
Heavens, God-men in Truth
as in essence ye be.
Depart now and leave me while I summon
those ye know of but as yet know not.