[The] compulsive spell in order to show you whether the thing was done: Burn cypress with the strip of papyrus and say:

„[Isis?], holy maiden, give me a sign of the things that are going to happen… 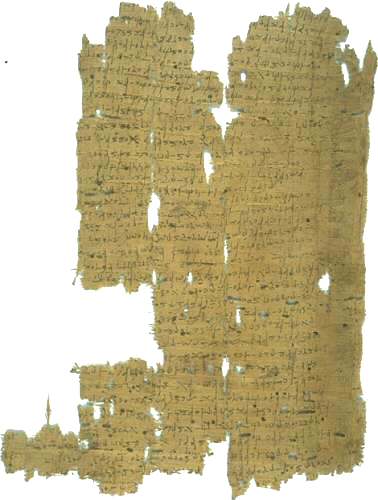 When you have said this and at the same time have opened your hands, […] of your hand from your breast. For you will see a star […] by necessity, at which you are to look [intently], as it flashes [a picture] while rushing [toward you], so that you become god-stricken. Wear the above picture [for protection]. […], it is a […] of Kronos who encourages you. After you have received this sign, rejoice at [your fortune] and say once: „chaithrai.“ For when you have said it, she will cooperate with you [in whatever] you pray for. And say these words immediately, [lest] there occur a removal of the stars and your lucky day: „Tha… [ou]sir phnouch mellanchiô kerdô melibeu… kasp… nebenthtrichgarn… ô thraô sau trais trais basum; immediately (twice), accomplish this, do it within this hour. Very glorious Pronoia, make the one who yesterday was [un]lovable beautiful [to all], make….

This fragment from a Greek recipe-book is written in a unique cryptic alphabet, probably intended to add to the spells‘ mystique and to prevent them from falling into the wrong hands. The preserved section contains a spell, and a ritual to verify its efficacy. Note how the practitioner threatens the god(s) and alludes to familiar events of Egyptian mythology, such as the scattering of the body of the good god Osiris by Seth, the god of chaos and destruction. Such language was considered normal in Egyptian religious utterances, which is one reason why non-Egyptians viewed Egypt as the land of magic par excellence.

This spell and many more very ancient spell can be found at Traditions of Magic: Recipe-Books

On Bewitching Ways you will find a lot of spells.