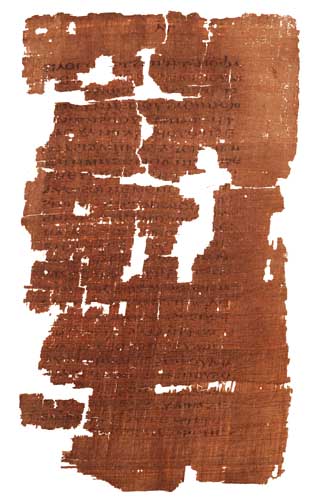 Actually there is a lot of information about the Judas Gospels which has been published on April 6.  While it is clear that the author of the Gospel of Judas was almost certainly not Judas Iscariot, the authorship of the Gospel of John and many other New Testament books has been questioned by scholars as well. Of course Elias and Seth have also something to say about that…

Elias on „The Book of John“

ELIAS: You have tapped into information within essence to be
offering you more accuracy in these stories. I shall express to you that this
particular John of which you speak, that has supposedly written this
final book of your biblical books, is not the same John as was
physically befriended of the physical individual of Jesus/Telleth.

They are two different individuals, and this individual
that has supposedly written this book … although I shall not
express to you that this individual in actual physical terms DID
write this book, for he did NOT write this book himself alone,
but has contributed to the imagery of that particular story.
But in this, he is a different physical focus than the one
that you identify as the companion of Jesus/Telleth.

ELIAS: As I have stated previously,
these books are more stories than they are actual facts,
as to your manner of speaking and thought processes.
These stories have been created by a collective of individuals
that have presented a concept and a philosophy to be
altering the reality of your physical focus for a time period,
which they have been extremely creative in their endeavor
and they have been accomplishing quite well in this creation.
But this is not necessarily to be taken literally as what you
now term to be channeled information, for this would be
suggestive that there were one individual that had been
expressing through an energy exchange, in your terms,
and offering information of another essence in like matter
to this exchange that I engage with Michael,
and this is not the situation that has occurred within that
particular focus.

In that focus, (Jesus) there has been one essence manifest into
three physical focuses which have gained popularity and notoriety,
but in actuality the events created by these three focuses are not
entirely coinciding with what has been written about them, for the
stories have been embellished quite to an extent, to be offering a
point and to be holding the energy to alter the reality en masse
within your physical dimension, which it has accomplished quite well!

Seth Material, channeled by Jane Roberts from 1963 – 1984,
in this note because so many Elias readers are also Seth readers
and these two sources share interesting similarities.

Jane first published some of, what she termed, „Christ material“
in The Seth Material (1970), Chapter 18, The God Concept –
The Creation – The Three Christs. However, Seth only actually
names John the Baptist and Jesus Christ saying that he would
offer the third name at a later date.

In Seth Speaks, (1972), Chapter 21, The Meaning of Religion,
session 586, Seth talks about the `Christ entity‘ in terms of
three physical focuses: John the Baptist, Jesus Christ,
and Paul or Saul of Tarsus. Seth also mentions that the
twelve disciples were fragment personalities of the `Christ entity‘
and the historical figure named „the teacher of righteousness“
was a probable self. All this to say that Seth’s version of the
`Christ entity‘ phenomenon is multidimensional and
multipersonal in nature.

Now, according to Elias, these three primary physical focuses –
whom we know today as John, Jesus, and Paul –
were also manifestations of a single essence.
But in addtion, Elias has offered that this `Christ essence,‘
so to speak, belongs to the Milumet essence family.

ELIAS: For you are correct that we are focused upon
the actions of essence families, and this holds significance.
Therefore, I shall express the essence family.
This particular essence in question, which was manifest
within three physical manifestations, is of the family of Milumet.

As to a distortion, you are partially correct in that the
manifestation within the intent of the family of Milumet was to be expressing of
what you now term to be spirituality. In the actual expression,
it was to be reminding you of your connections with essence.
You are correct, in a sense, that this information has been
distorted, although you have purposefully chosen the progression that you
have created throughout your history, leading you within your
progression of probabilities to this experience of your present
shift.

Therefore, you may in one respect express that you have distorted
the information offered of essence, but within another respect
you have changed the information for your own experience.
This essence family, within initiating of your religious time
period, focused upon the intent of a remembrance of no separation of
essence. This was translated symbolically, physically.“ [session 141,
December 22, 1996]

According to Seth, it was Paul who, in creating the organization
of the church that was left unsatisfied, in that he had not
fulfilled his original intent. Both John and Jesus succeeded in fulfilling
theirs‘. So that unfulfilled intent forms the basis for Paul’s „return,“ so
to speak, to help make human kind more aware of their connection with All-That-
Is, no longer requiring the direct mediation of priesthoods and
calcified beauracracies to directly experience the Divine Within.

While Seth speaks of this so-called „return“ in very singular terms,
Elias expands and diverges at this point. According to Elias,
that unfulfilled intent forms the basis for the focus of
Paul’s mergence with the essence of Rose to remanifest
as nine male children and lend energy to our shift.