Seth on “The Garden of Eden  •  Awakening of the Outer Ego” 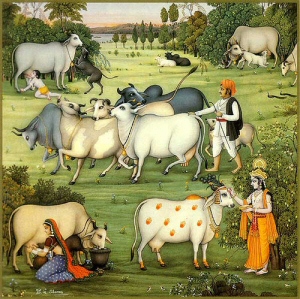 The Garden of Eden legend represents a distorted version of man’s awakening as a physical creature. He becomes fully operational in his physical body, and while awake can only sense the dream body that had earlier been so real to him. He now encounters his experience from within a body that must be fed, clothed, protected from the elements – a body that is subject to gravity and to earth’s laws.

He must use physical muscles to walk from place to place. He sees himself suddenly, in a leap of comprehension, as existing for the first time not only apart from the environment, but apart from all of earth’s other creatures.

“The sense of separation is, in those terms, initially almost shattering. Yet [man] is to be the part of nature that views itself with perspective [i.e. is self-aware]. He is to be the part of nature that will specialize, again, in the self-conscious use of concepts. He will grow the flower of the intellect – a flower that must have its deep roots buried securely within the earth, and yet a flower that will send new psychic seeds outward, not only for itself but for the rest of nature, of which it is a part.

“But man looked out and felt himself suddenly separate and amazed at the aloneness. Now he must find food, where before his dream body did not need physical nourishment. Before, man had been neither male nor female, combining the characteristics of each, but now the physical bodies also specialized in terms of sexuality. Man has to physically procreate. Some lost ancient legends emphasized in a clearer fashion his sudden sexual division. By the time the biblical legends came into being, however, historical events and social beliefs were transformed into the Adam and Eve version of events.

“On the other hand, man did indeed feel that he had fallen from a high estate, because he remembered that earlier freedom of dream reality – a reality in which the other creatures were still to some degree immersed. Man’s mind, incidentally, at that point had all the abilities that you now assign to it: the great capacity for contrast of imagination and intellect, the drive for objectivity and for subjectivity, the full capacity for the development of language – a keen mind that was as brilliant in any caveman, say, as it is in any man on a modern street.

“But if man felt suddenly alone and isolated, he was immediately struck by the grand variety of the world and its creatures. Each creature apart from himself was a new mystery. He was enchanted also by his own subjective reality, the body in which he found himself, and by the differences between himself and others like him, and the other creatures. He instantly began to explore, to categorize, to point out and to name the other creatures of the earth as they came to his attention.

Man’s dream body is still with him, of course, but the physical body now obscures it. “In a fashion, it was a great creative and yet cosmic game that consciousness played with itself, and it did represent a new kind of awareness, but I want to emphasize that each version of All-That-Is is unique. Each has its purpose, though that purpose cannot be easily defined in your terms. Many people ask, for example: ‘What is the purpose of my life?’ Meaning: ‘What am I meant to do?’ but the purpose of your life, and each life, is in its being. That being may include certain actions, but the acts themselves are only important in that they spring out of the essence of your life, which simply by being is bound to fulfill its purposes.

“Man’s dream body is still with him, of course, but the physical body now obscures it. The dream body cannot be harmed while the physical one can – as man quickly found out as he transformed his experience largely from one to the other. In the dream body man feared nothing. The dream body does not die. It exists before and after physical death. In their dream bodies men had watched the spectacle of animals ‘killing’ other animals, and they saw the animals’ dream bodies emerge unscathed.

“They saw that the earth was simply changing its forms, but that the identity of each unit of consciousness survived – and so, although they saw the picture of death, they did not recognize it as the death that to many people now seems an inevitable end.

“[Men] saw that there must be an exchange of physical energy for the world to continue. They watched the drama of the ‘hunter’ and the ‘prey,’ seeing that each animal contributed so that the physical form of the earth could continue – but the rabbit eaten by the wolf survived in a dream body that men knew was its true form. When man ‘awakened’ in his physical body, however, and specialized in the use of its senses, he no longer perceived the released dream body of the slain animal running away, still cavorting on the hillside. He retained memory of his earlier knowledge, and for a considerable period he could now and then recapture that knowledge. He became more and more aware of his physical senses, however: Some things were definitely pleasant and some were not. Some stimuli were to be sought out, and others avoided, and so over a period of time he translated the pleasant and the unpleasant into rough versions of good and evil.

“Basically, what made him feel good was good. He was gifted with strong clear instincts that were meant to lead him toward his own greatest development, to his own greatest fulfillment, in such a way that he also helped to bring about the highest potentials of all of the other species of consciousness. His natural impulses were meant to provide inner directives that would guide him in just such a direction, so that he sought what was the best for himself and for others.”

“At the time of this awakening man did experience, then, some sense of separation from his dream body, and from his own inner reality – the world of his dreams – but he was still far more aware of that subjective existence than you are now.

“The practical nature of his own dreams was also more apparent, for again, his dreams sent him precise visions as to where food might be located, for example, and for some centuries there were human migrations of a kind that now you see the geese make. All of those journeys followed literal paths that were given as information in the dream state. [But] more and more man began to identify himself with his exterior environment. He began to think of his inner ego almost as if it were a stranger to himself. It became his version of the soul, and there seemed to be a duality – a self who acted in the physical universe, and a separate spiritlike soul that acted in an immaterial world.

“… Man does have an instinct and a desire to live, and he has an instinct and a desire to die. The same applies to other creatures. In his life [each] man is embarked upon a cooperative venture with his own species, and with the other species, and dying he also in that regard acts in a cooperative manner, returning his physical substance to the earth. Physically speaking, man’s ‘purpose’ is to understand the qualities of love and creativity, to intellectually and psychically understand the sources of his being, and to lovingly create other dimensions of reality of which he is presently unaware. In his thinking, the quality of his thoughts, in their motion, he is indeed experimenting with a unique and a new kind of reality, forming other subjective worlds which will in their turn grow into consciousness and song, which will in their turn flower from a dream dimension into other ones. Man is learning to create new worlds. In order to do so he has taken on many challenges.

{josquote}Man is born with an inbuilt propensity for language, and for the communication of symbols through pictures and writing.{/josquote}“… You are aware of such activities now as automatic speaking and automatic writing, and of sleepwalking. These all give signs in modern times of some very important evidence in man’s early relationship with the world and with himself.

“Sleepwalking was once, in that beginning, a very common experience – far more so than now – in which the inner self actually taught the physical body to walk and hence prevented the newly emerged physically oriented intellect from getting in its own way, asking too many questions that might otherwise impede the body’s smooth spontaneous motion.

“In the same fashion man is born with an inbuilt propensity for language, and for the communication of symbols through pictures and writing. He spoke first in an automatic fashion that began in his dreams. In a fashion, you could almost say that he used language before he consciously understood it. It is not just that he learned by doing, but that the doing did the teaching. Again, lest there be a sharply inquiring intellect, wondering overmuch about how the words were formed or what motions were necessary, his drawing was in the same way automatic. You might say – almost – that he used the language ‘despite himself.’ Therefore, it possessed an almost magical quality, and the ‘word’ was seen as coming directly from God.“