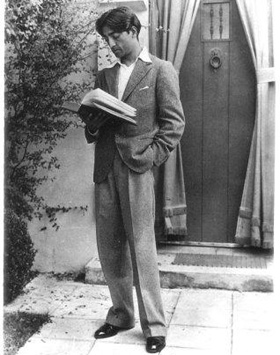 Krishnamurti discusses here what is action and where do ideas come from and comes to the conclusion that all action based on idea is limited because it is only memory, conditioning. The only way to escape these limitations and therefore suffering is love which is a spontaneous action. This is a very sophisticated elaboration of Jiddu Krishnamurti but very interesting and in my opinion very bright.

I should like to discuss the problem of action. This may be rather abstruse and difficult at the beginning but I hope that by thinking it over we shall be able to see the issue clearly, because our whole existence, our whole life, is a process of action.

Most of us live in a series of actions, of seemingly unrelated, disjointed actions, leading to disintegration, to frustration. It is a problem that concerns each one of us, because we live by action and without action there is no life, there is no experience, there is no thinking. Thought is action; and merely to pursue action at one particular level of consciousness, which is the outer, merely to be caught up in outward action without understanding the whole process of action itself, will inevitably lead us to frustration, to misery.

Now action creates the actor. That is the actor comes into being when action has a result, an end in view. If there is no result in action, then there is no actor; but if there is an end or a result in view, then action brings about the actor. Thus actor, action, and end or result, is a unitary process, a single process, which comes into being when action has an end in view. Action towards a result is will; otherwise there is no will, is there? The desire to achieve an end brings about will, which is the actor – I want to achieve, I want to write a book, I want to be a rich man, I want to paint a picture.

We are familiar with these three states: the actor, the action, and the end. That is our daily existence. I am just explaining what is; but we will begin to understand how to transform what is only when we examine it clearly, so that there is no illusion or prejudice, no bias with regard to it. Now these three states which constitute experience – the actor, the action, and the result – are surely a process of becoming. Otherwise there is no becoming, is there? If there is no actor, and if there is no action towards an end, there is no becoming; but life as we know it, our daily life, is a process of becoming. I am poor and I act with an end in view, which is to become rich. I am ugly and I want to become beautiful. Therefore my life is a process of becoming something. The will to be is the will to become, at different levels of consciousness, in different states, in which there is challenge, response, naming and recording. Now this becoming is strife, this becoming is pain, is it not? It is a constant struggle: I am this, and I want to become that.

If we can understand action in the fundamental sense of the word then that fundamental understanding will affect our superficial activities also; but first we must understand the fundamental nature of action. Now is action brought about by an idea? Do you have an idea first and act afterwards? Or does action come first and then, because action creates conflict, you build around it an idea? Does action create the actor or does the actor come first?
{xtypo_code}It is very important to discover which comes first. If the idea comes first, then action merely conforms to an idea, and therefore it is no longer action but imitation, compulsion according to an idea. It is very important to realize this; because, as our society is mostly constructed on the intellectual or verbal level, the idea comes first with all of us and action follows. Action is then the handmaid of an idea, and the mere construction of ideas is obviously detrimental to action. Ideas breed further ideas, and when there is merely the breeding of ideas there is antagonism, and society becomes top-heavy with the intellectual process of ideation. Our social structure is very intellectual; we are cultivating the intellect at the expense of every other factor of our being and therefore we are suffocated with ideas. {/xtypo_code}Can ideas ever produce action, or do ideas merely mould thought and therefore limit action? When action is compelled by an idea, action can never liberate man. It is extraordinarily important for us to understand this point. If an idea shapes action, then action can never bring about the solution to our miseries because, before it can be put into action, we have first to discover how the idea comes into being. The investigation of ideation, of the building up of ideas, whether of the socialists, the capitalists, the communists, or of the various religions, is of the utmost importance, especially when our society is at the edge of a precipice, inviting another catastrophe, another excision. Those who are really serious in their intention to discover the human solution to our many problems must first understand this process of ideation.

What do we mean by an idea? How does an idea come into being? And can idea and action be brought together? Suppose I have an idea and I wish to carry it out. I seek a method of carrying out that idea, and we speculate, waste our time and energies in quarrelling over how the idea should be carried out. So, it is really very important to find out how ideas come into being; and after discovering the truth of that we can discuss the question of action. Without discussing ideas, merely to find out how to act has no meaning.

Now how do you get an idea – a very simple idea, it need not be philosophical, religious or economic? Obviously it is a process of thought, is it not? Idea is the outcome of a thought process. Without a thought process, there can be no idea. So I have to understand the thought process itself before I can understand its product, the idea. What do we mean by thought ? When do you think? Obviously thought is the result of a response, neurological or psychological, is it not? It is the immediate response of the senses to a sensation, or it is psychological, the response of stored-up memory. There is the immediate response of the nerves to a sensation, and there is the psychological response of stored-up memory, the influence of race, group, guru, family, tradition, and so on – all of which you call thought.

Therefore there has to be quite a different approach. You have to find out for yourself, inwardly, whether you are acting on an idea, and if there can be action without ideation. Let us find out what that is: action which is not based on an idea.

When do you act without ideation? When is there an action which is not the result of experience? An action based on experience is, as we said, limiting, and therefore a hindrance. Action which is not the outcome of an idea is spontaneous when the thought process, which is based on experience, is not controlling action; which means that there is action independent of experience when the mind is not controlling action. That is the only state in which there is understanding: when the mind, based on experience, is not guiding action: when thought, based on experience, is not shaping action. What is action, when there is no thought process? Can there be action without thought process? That is I want to build a bridge, a house. I know the technique, and the technique tells me how to build it. We call that action. There is the action of writing a poem, of painting, of governmental responsibilities, of social, environmental responses. All are based on an idea or previous experience, shaping action. But is there an action when there is no ideation?
{xtypo_code}Surely there is such action when the idea ceases; and the idea ceases only when there is love. Love is not memory. Love is not experience. Love is not the thinking about the person that one loves, for then it is merely thought. You cannot think of love. You can think of the person you love or are devoted to – your guru, your image, your wife, your husband; but the thought, the symbol, is not the real which is love. Therefore love is not an experience. {/xtypo_code}When there is love there is action, is there not?, and is that action not liberating? It is not the result of mentation, and there is no gap between love and action, as there is between idea and action. Idea is always old, casting its shadow on the present and we are ever trying to build a bridge between action and idea. When there is love – which is not mentation, which is not ideation, which is not memory, which is not the outcome of an experience, of a practised discipline – then that very love is action. That is the only thing that frees. So long as there is mentation, so long as there is the shaping of action by an idea which is experience, there can be no release; and so long as that process continues, all action is limited. When the truth of this is seen, the quality of love, which is not mentation, which you cannot think about, comes into being.

One has to be aware of this total process, of how ideas come into being, how action springs from ideas, and how ideas control action and therefore limit action, depending on sensation. It doesn’t matter whose ideas they are, whether from the left or from the extreme right. So long as we cling to ideas, we are in a state in which there can be no experiencing at all. Then we are merely living in the field of time in the past, which gives further sensation, or in the future, which is another form of sensation. It is only when the mind is free from idea that there can be experiencing.