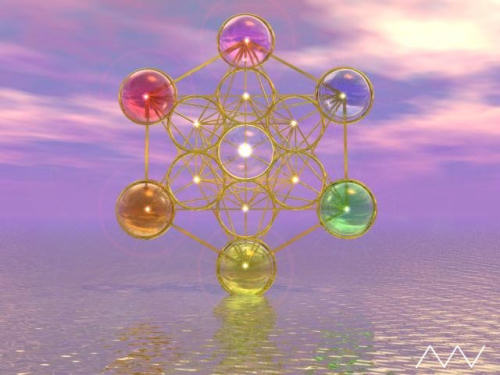 You see, Atlantis existed for over 200,000 years. The vast majority of the Atlantean times were epochs of light! Only the final phase, the period from 17,500 BC to 10,500 BC was in your terms, a dark era, but one rich in lesson.

We tell you in fact that the Golden Period of Atlantis was the highest level of Light Consciousness ever achieved on the Earth Plane in any advanced civilization;, higher than LeMuria, higher than Mu, higher than Rama, higher than Ignacious. It has become somewhat fashionable to consider LeMuria as being the utopian civilization, and though they did achieve a relatively short lived phase of high consciousness, most in that era were not truly in physical bodies, rather in devic-like etheric states, and did not face the difficulties required of the physical earth stage.

Indeed LeMuria never achieved the highly advanced level that existed in that Golden Phase of Atlantis from 40,000 BC to 18,000 BC. A time when Gods walked with men, and all knew joyful expression It was the hallowed time when many of you walked as Star Children, and later chose biology and the lesson cycles of reincarnation on the Blue Planet called Earth.

So when you consider Atlantis, DO NOT only remember its sad demise! It was but a short phase of the magnificent antediluvian world, yet it must not be forgotten, so very much is to be gained by understanding the final phase, and Dear Ones, it is time to remember.

So we speak of once mighty Atlantis, and we speak to all of you, for Atlantis is a great hologramic lesson, and ones whose time has returned, for the memory of Atlantis is not just a healing. Indeed, for some it is a requisite healing, a necessary cleansing, but for others it is also a benevolent empowerment. It recalls a time when you walked in knowledge. Regardless of your myriad roles in Atlantis, and Dear Ones, 70% of all on the planet at this time experienced physicality there, Atlantis now calls to you.

And the call is not just for those of you of the Law of One, it is equally called to the Aryans, to the Sons of Belial. Indeed many of you experienced lifetimes in both ideologies. Does that surprise you?

The Deluge of 17,500 BC – Downward Spiral of the Final Phase

The time is after the second deluge, when the utopian Golden Age subsided and Atlantis split into 5 islands. The three major islands were known as Poseida, Aryan and Og. The two smaller islands were under the rule of Aryan, and were known as Atalya and Eyre. And so in the days after the second break up of Atlantis, the benevolent government rule by kingdom passed into the phase of a confederation, state governments, in your terms, that ruled each of the islands. An aristocracy of sorts evolved that consisted of two opposing ideologies. The two major components of these were the ‚Law of One‘, based predominantly on the Isle of Poseida and ‚The Sons of Belial‘ based on the Isle of Aryan. The island of Aryan was the most populated and exerted influence and political control over Og, Atalya and Eyre.

Poseida was the planets most potent vortex portal complex at the time of Atlantis. The Poseida grouping and isle housed the Temple of Healing, the Temple of Sound, the Temple of One, the Temple of Regeneration and the Temple of Knowledge. Poseida housed most of the major centers for higher learning. These were placed on Poseida because of its advantageous location within the geodesic grids and its proximity to beneficial electromagnetic energies that spiraled upward from the earth’s core. An incredibly potent healing spring flowed on Poseida, near the Temple of Healing, and its lore spawned the myths of the ‚Fountain of Youth‘ passed down by the indigenous peoples of Florida. It flows yet into the oceans near Bimini.

The tall ones, the golden race of Atlantis, of Pleadean seed were centered in Poseida, these ones averaging 10 to 12 feet in stature. These were a gentle race of giants, involved in the cultural, artistic and educational pursuits in the heart of Atlantis. Poseida was also the headquarters and nucleus of the crystalline power grid and interdimensional tunnel system. The most advanced, complex and beautiful of the crystals were here. The were of Arcturian and Sirian construct, a living amalgam of many crystalline forms imbued with an alloy of platinum and gold. The crystals were housed in magnificent Temples, some built of marble, others of crystalline sheets of beryl, corundum and diamond. Poseida was also the capital city of the island, and was called the Emerald City. The Atlanteans had perfected, with Arcturian technology, the ability to grow crystals of every structure and essence in an accelerated growth within the underground crystal beds of Arkansas, Tibet and Brasil, all being Atlantean colonies, accessed through the interdimensional tunnel system.

Throughout Atlantis, power grid crystals, called posers, were triangulated and connected through a gold-copper rod under an spherical dome that could be angled to receive specific stellar, solar and gravitational energy waves. This was the system used to power homes, offices, media, and theatres, manufacturing concerns, medical centers, schools and businesses. The poser system was received in each structure by receiving crystal units of various sizes. The poser system was also able to receive specialized refracted light and feed it into the ley energy system for use in the interdimensional tunnel system and feed crystalline light into conductive earth currents to raise the frequency into a semi- aware electromagnetic plasmic field of benevolent energy capable of retaining spiritual frequencies.

A great crystalline satellite, referred to as the second moon of Atlantis, floated above in the skies and received, amplified and reflected refined energy back to the crystals for various beneficial purposes. It served both the posers and the Master Crystals used in temples. Specialized energy fields were projected into agricultural and crystal growing areas to amplify and accelerate growth, as well as into universities, hospitals, schools, offices, factories and work places to create a sense of well being and invigoration for the workers and students. We will speak more of this ’second moon ‚later in this assay.

Now, the Temples were astonishing works of sacred geometry and stunning architecture. Many of the great temples were covered in a dome of projected crystalline amplified light somewhat like a glowing force field. These were of various colors and glowed in day and night. These were varied according to the purpose of the temple complex. Some temples projected domes and fields of vibratory light and resonate sound frequencies that amplified the senses and chakras, others amplified the receptive learning ability of the mind, and others enabled multidimensional consciousness, communication and transport. Additionally most of the he major cities during the Golden Age of Atlantis had crystalline power domes of energy fields above them.

After the second deluge, only, the capital city of Poseida had a full crystalline energy dome, and it was an incredible emerald green color.

Prior to the deluge of 17,500 BC, most major cities, including Meruvia, the Capital of Aryan had such power domes over the perimeter. The one in Aryan was a soft ruby red.

In the Golden Age of Atlantis, the Pyramids were three and four sided, depending on their utility and generally made of marble, granite and complex crystals. The three-sided pyramids were used as antennas to draw and amplify energies and fed them into the poser grid to power homes, factories and create energy fields for various utilities. The crystalline satellite was used to reflect the angled stellar energy waves into these triangulated grids. There were over 100 of these triangulated pyramidal grid complexes. They were set up in concentric triangulation patterns all over the planet. They established a hemispheric grid network of crystalline and electromagnetic energy dividing the areas of Atlantis, America, Africa, Mediterranean Europe and South America into different demographic centers-for powering population centers, and to modulate weather patterns and tides. The areas of Mongolia and Tibet were also part of this complex, connected by interdimensional ley tunnels. But the largest groupings of these were in the homelands of Atlantis.

The four- sided pyramids were essentially Temple complexes set as full octahedrons and used for healing, learning, regeneration and spiritual purposes. These were not triangulated, and generally set on hilltops or along the coastlines to receive both telluric and celestial energies. The lands below the center plane were excavated to allow for the downward pyramid of the octahedron design construct, thus connecting energetically to both above and below.

The ‚Law of One‘ contingency of Poseida were devoutly spiritual people and sought equality among the people and a unification of Oneness. Although much technology and quality of life had been lost in the prior two breakups of Atlantis (the first in 58,000 BC, the second in 17,500 BC) technology still remained at an advanced level. Yet the harmony experienced in the Golden Age of Atlantis spiraled downward after the break up into island s in 17,500 BC as the islands grew into separately governed entities, which held to very differing ideologies in the initially chaotic and difficult period of reconstruction immediately after the break up.